Meeting was called to order at 7:30 p.m. with the pledge to the flag.  Members Bob Cook, Amanda Gusek, Eleanor Kilmer, Bob Steele and James Satchel were present.

Minutes from the December 7, 2015 meeting were motioned for approval by Steele and seconded by Kilmer, motion carried with 4 yes.

Bob commented that Rod Merten’s camera was running and in the appropriate position.

Commissioner: No report at this time

Ambulance: Glenn Fox reported. No questions at this time.

Mayville Library: No report at this time

Planning Commission: Doug Graham reported on the township survey stating the results showed that the majority of the township liked its rural setting. Statistics show that 17% of Dayton Township responded.

Zoning Administrator: Bob Cook reported that there were no permits at this time. Bob also reported that Jack Peet’s property was purchased by Gerald Welcome and he is in the process of cleaning it up.

Blight officer: Mike Urban reported on the Shay Lake blight situation. He had a meeting with attorney Abbey and Tuscola County Magistrate and was told at that time the misdemeanor ticket had to be served in person. Mike commissioned a company in Taylor to serve the misdemeanor ticket to the property owner but was not able to serve the ticket due to the property owner refusing to come to the door. Mike also reported that the township was not charged $50.00 per trip and that he personally paid the expenses totaling $45.00 for the five trips.

At this time Robert Cook stated that he had made two phone calls to Mr. Satchel, one on Thursday, December 30, 2015 at 2:02 p.m. and one on Friday, January 1, 2016 at 10:44 a.m. for which the dates and times are saved on Robert Cook's cell phone. Mr. Satchel’s phone immediately went to voice mail each call and subsequently Mr. Cook physically delivered the meeting notice to Mr. Satchel at his residence on Friday, January 1, 2016 which Mr. Satchel personally accepted approximately 23 hours before meeting. (see attached phone records and special meeting notice).

Clerk: Invoices to be paid with the AUTO EFT and checks #7349 - #7366 in the amount of $18,136.47. After a brief explanation of said invoices it was motioned by Bob Steele, seconded by Eleanor Kilmer to pay the bills.  Motion carried with 4 yes.

Motion to accept the Dayton Township Survey as a valid survey of the residents of Dayton Township. It was motioned by Bob Steele, seconded by Eleanor Kilmer. Motion carried with 4 yes.

Motion to adjourn the meeting made by Bob Steele, seconded by Eleanor Kilmer, motion carried and meeting was adjourned at 8:15 p.m. 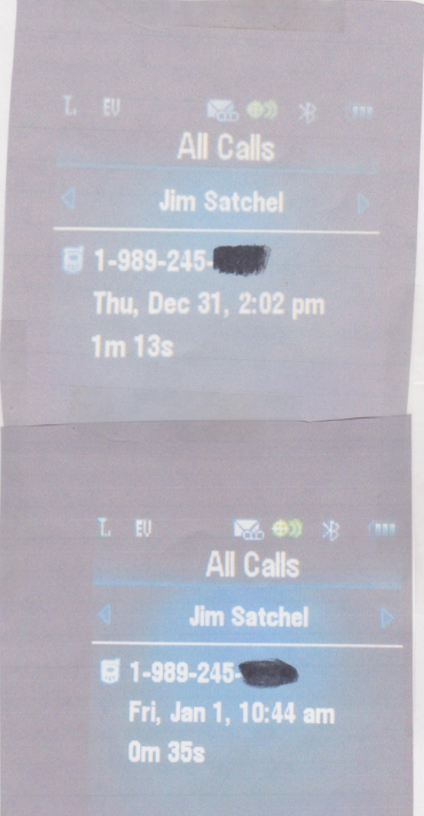